In one of my previous blog posts I asked: “Anyone ever wondered how far cross training mileage (on a bike) could reasonably take a multisport endurance athlete to a comfortable ultra-distance marathon finish?”
In that blog I related my running and cycling activity levels in the run up to Comrades, including the taper, but did not reveal the ultimate outcome. The running mileage was low but the question was whether the cycling mileage and the overall fitness would more than make up make up for the deficit.  Weeks after the 2015 race, this is what I shared….

"A few weeks ago I nervously decided to go into uncharted waters by taking a shot at completing the Comrades Marathon on low mileage, relying almost completely on the endurance that I developed cross training in cycling.

Fast forward to this day, I stand proudly with a bronze medal around my neck after surviving groin and hip issues from early on into the race and fighting to stay on course like a warrior. As an endurance athlete like many others, I have learned to accept the trials that come with this territory and used the mantra “pain is temporary, glory forever” to keep me going.

The issues were not new - I had the exact hip and groin challenge during the second half of the 2014 Two Oceans Marathon – and finished just in time to make the bronze medal cut-off. The concern I had at Comrades 2015 was that the onset was too early into the race (before the 15km mark), the terrain more testing and the distance much longer. My prayers were answered when I met my seconds at around 22km into the race and they had remembered to bring my massage stick. This stick, together with the foam roller, is the most important item in my ultra-distance running tool box. The stick instantaneously relaxed my tight groin muscles and although my right hip grew increasingly cranky from around 30km into the race, it was only after half way that it began to threaten my ability to complete the race.

After half way, I prepared myself mentally to put up a big fight. I conceptually divided the course into two half marathons, took a very deep breath, set my sights towards Pietermaritzburg and got on with the programme. The sub-11 bus caught up with me at around 25km to go and left me a bit disheartened because I simply could not keep up. I knew that I was on track to finish but it took me a while before I checked my watch to estimate my finish time because I was preoccupied with the hip – massaging it with my right thumb, left thumb and right palm as I ran, and all the time making sure that I keep my normal running gait. Eventually at 17km to go, I looked at my average pace and how much time I had left to finish and was pleasantly shocked that I had more than three hours. I calculated that to get to the top of Polly Shortts at 10:00 was safely within reach - and so I had renewed energy. Up to that point, my fixation with the hip pain made me grossly underestimate my pace and lose focus on everything else. I reached Polly Shortts at 9:58 – content, under the circumstances, that I was only about 28 min off my original race plan. Because the pain was becoming hugely unbearable, I slowed down after that but kept a close eye on the time to make sure I was not cutting a sub-11 finish too fine.

There is something special about the Comrades Marathon finish. When you enter the stadium and go through the narrow passages, all aches and pains literally disappear. You start feeling like you are floating on air and you are on an out-of-body experience trip. You see this mass of happy people, making huge noise, some calling your name; and you also see the huge flood lights that brighten the area and project some bit of dust in the air to complete the glow. The real magic, though, is at the end of the narrow passage when the finish area widens up, almost swallowing you as you complete your last turn. Ahead of you is the clock that continues to tick in large red numbers and as you get closer, there are no words to describe the sense of accomplishment. Those few moments towards the finish line wrap up all the long runs, morning runs, afternoon runs, gym sessions, massage sessions, speed sessions, hill sessions, tempo runs and qualifiers, in just a few, triumphant steps.

I completed in 10:54, hugely relieved and thankful that I have managed to reach the finish line in one piece. I did not feel hugely fatigued at any point during the race and after the run, my quads, hamstrings and calves felt a lot fresher than ever before.

And so the verdict is ..... Spending more time on my mountain bike and less on my legs is not bad for Comrades at all. I completed within the top 50% of the entire field that started and I believe that I could have done better if I did not have serious niggles. The other good thing is that, unlike before, I do not feel at this stage of the season that I’ve “had enough” of running and I need a huge break. This implies that I will be able to participate in trail runs – the trail season is exciting and starts gaining momentum around this time.

The only thing I will do differently next year is to never stop running completely when I increase my cycling mileage. This will minimise the time, effort and frustration to get the joints and mechanics back on form to be able to absorb the high impact associated with running. I am confident that my hip problem was resolved and would not have surfaced if I had maintained my runs between December and March. Completing the Comrades Marathon 2015 is an exciting breakthrough for me as it removes a lot of the anxiety I had about going full multisport endurance." 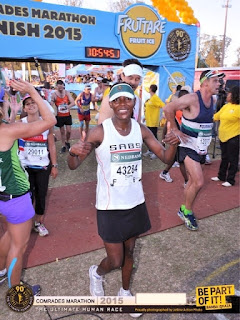