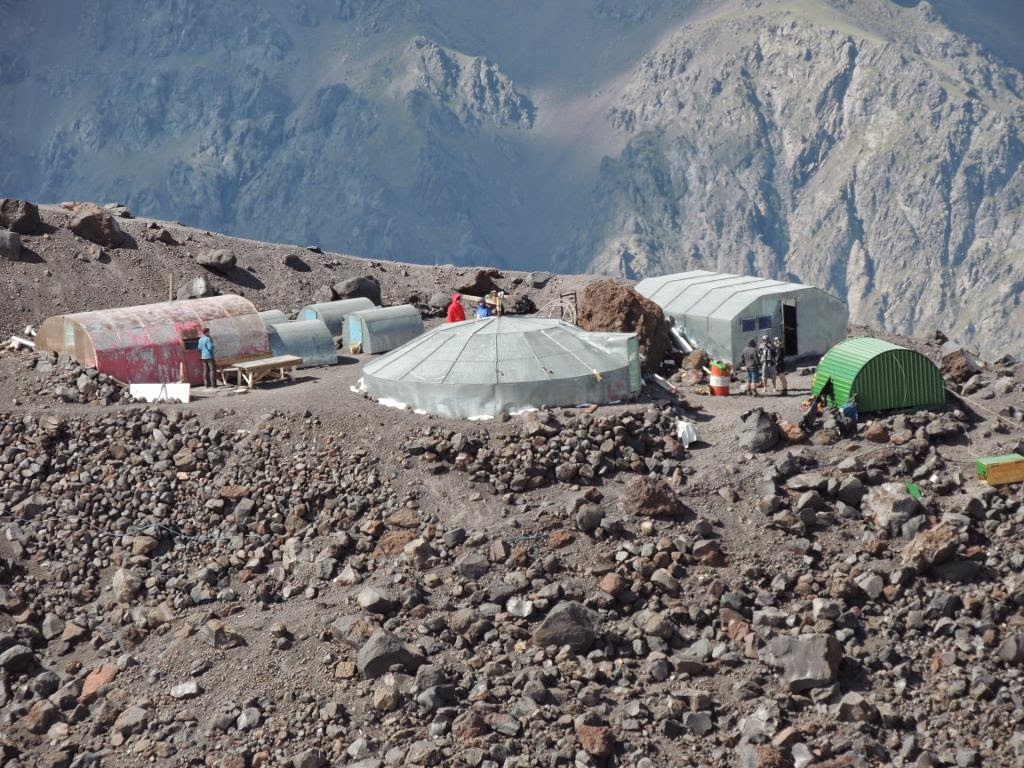 I liked the dome that we slept in at high camp. Very warm and compared to a tent, a lot higher and provided much needed room to manoeuvre. For the first time in days I was able to sleep inside a sleeping bag with a single layer of clothing on my body, no glove and glove inners, no sock layers and no hats.

The first morning at hike camp was the acclimatisation climb to 4600m – a climb of 800m all on snow. The climb was very hard from the word go. We had to be roped in most of the hike because of the many crevasses along the trail. To walk on a single file for too long and paying attention to the rope is an additional distraction you sometimes did not need. The last 100m of the climb was the most difficult and because we arrived later than the guys, we did not have enough time to recover; we had to get on with the ice-axe and rope training. The view were breath-taking.

It was not as cold as I anticipated and hoped and prayed for good weather the next day. After training we descended back to high camp for dinner and much needed rest. The question from some of the team was how we were going to recover in time for the summit climb in 30 hours time. We all resolved to minimise movement during the period, we had no other choice.

The next day was a “lazy” day but there was not much sleeping – our anxiety had peaked and as my mother would say – we suffered from excitosis. So it was breakfast, sleep (or try to), lunch, sleep (or try to) and then after dinner we had to make sure all gear and equipment were packed and ready. Andrei our chief guide announced that the weather was looking good and that we will be woken up at 12am as planned. He would wake up at 11pm for final check before waking us up at midnight.

In no time, we had to get ready to leave. We finished earlier than anticipated and left shortly before 2am. The first 800m were all too familiar – we completed the same hike the previous day. The question was how our legs were going to hold up for another 1000 gruelling metres. At around 4800m a decision is made around whether we summit the east peak (5621m) or the west peak (5642m).  Although the east peak is a recognised summit normally used when weather is bad, amongst climbers this is seen as a “no-summit”. After a fierce debate that might have lasted for about half an hour, we headed for the west summit. That meant an additional 2 hours of climbing that I personally felt we did not afford. But I was democratically silenced. This decision proved to be costly in a way, and there were regrets. At 5000m the mountain was asking us questions and we were fumbling for answers. I have never been so tried in my life. The weather was great, all our prayers were answered, but we were taking huge strain. We were down to doing about 100m of altitude in an hour and the legs were heavy. The 2pm cut-off at the summit was looking a bit dicey.

We got to this resting point where we could clearly see people coming from the South joining this climb so steep that it reduced movement to slower than snail pace. We could see big strong men resting every few steps, assuming almost foetal position as they hung onto their trekking poles. Our guide afforded us the longest rest to prepare for this climb. We removed our back packs, sat down on the rocks and try to eat some of the sandwiches and chocolates in our packs. There was not much conversation at this point, it was tense and very scary. There was also not much left to offer, we had dug deep and we were asked to dig some more. At no point did I entertain the thought of turning back though – punishing as it was. As an endurance athlete I know the power of visualising the end state. The climb from 5300m to 5642m was the steepest and on fatigued legs, there is no way to describe what it took to make each step.

The closer we got to the summit, the worst the weather became. That meant that we literally had to make a run for the summit. After 12.5 hours of climbing that was no mean feat. The adrenalin kicked in though, but for me not nearly enough. I could see the summit but my legs were simply not responding to the frantic call from Natasha the guide to "go-go-go". The weather got so bad that we could not spend even 5 minutes at the summit. What was most scary for me was this electric-current like phenomenon that was attacking every few seconds. When that happened, Natasha’s calls to descend would get loud and more incessant. After taking photos, we had to literally run down to safety, to a level where the weather was a lot calmer.


The entire descent took us in excess of 5 hours and at exactly 20:00 on 3 July, we arrived back at high camp. Completely kaput but hugely relieved. We were called super girls for the fight that we put up – but great fight it was. 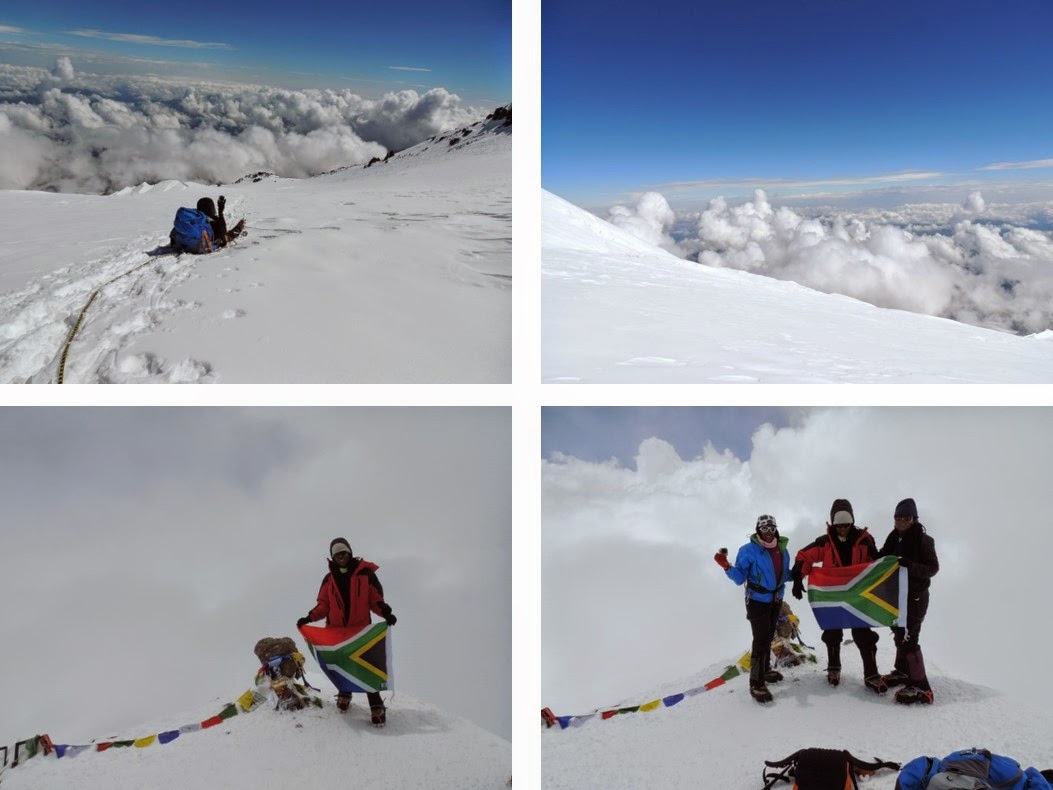 The first encounter with snow was on our first hike to High Camp (3800m). This was the day we hiked from Base Camp to High Camp, an altitude of 1300m, with half our gear and equipment. We dropped the luggage at high camp, had lunch and hiked back down to base camp for the final night ahead of summit.

The hike was hard – to put it in perspective – from high camp at Barafu to the summit of Kilimanjaro is about a 1000m of altitude. It was not the luggage we were carrying as none of us was carrying more than 13kg. The terrain is just testing. It has 5 tough climbs, some of them very technical and requiring upper body strength and loads of concentration. The ultimate test though was the last 100m of altitude on deep, soft snow. The hiking boots we had on were obviously less than adequate for the terrain but to go through the process of putting crampons on would have been a hassle. It took a few falls and a lot of energy to get to the top. The thing about this section of the hike was it comes late when we are already fatigued, not just from the hours we spent hiking that day but from previous days too. After taking a tumble, it takes a lot to get yourself back on your feet and to continue with the drill - first pull trekking poles out of the snow with some reasonable force and thereafter lift the legs. 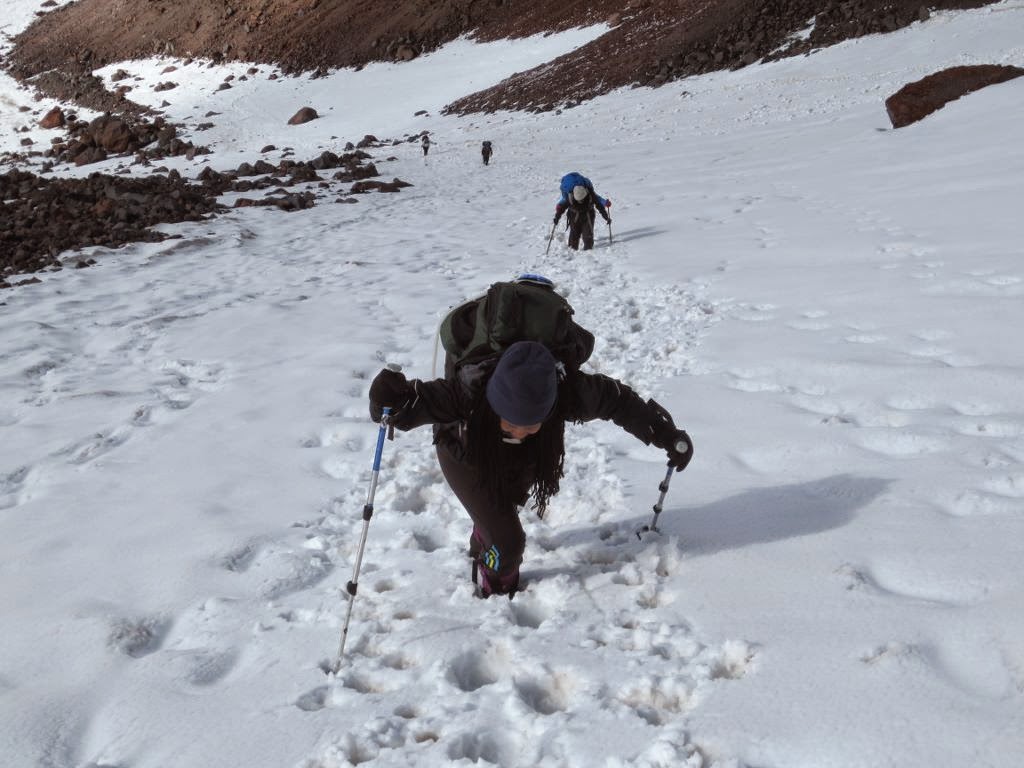 The nightmare, though, was the drastic change in weather just as we were leaving high camp to start the descent to base camp. It started to snow and it got very cold. We took off with the understanding that we would be leaving the snow fall behind. That turned out exactly true, except the snow was replaced by rain. To hike in cold, wet conditions is really a challenge and unfortunately we had to take a less dangerous route that took a lot longer and was very slippery. The idea of getting to base camp, wet and cold, with no hot shower to get into or a hot bath to run was a bit difficult to accept. We slept in tents at Base Camp and you can’t get into a tent with wet, muddy gear. The logistics of preparing to sleep that evening was a challenge - even the tastiest meatballs that were prepared for dinner only managed to put half a smile on my face….. The discomfort was rather deep.

The next morning was sunny and warm, just the ideal weather to dry gear and clothing from the nightmare of the day before. So the hike back to High camp was delayed by an hour as we watched the gear dry. I was in no hurry for the 1300m climb anyway but there was no running away from it. Took us a lot longer than the day before as fatigue was seriously setting in and so my concerns around how we were going to climb 1800m on summit day on tired legs were growing fast. 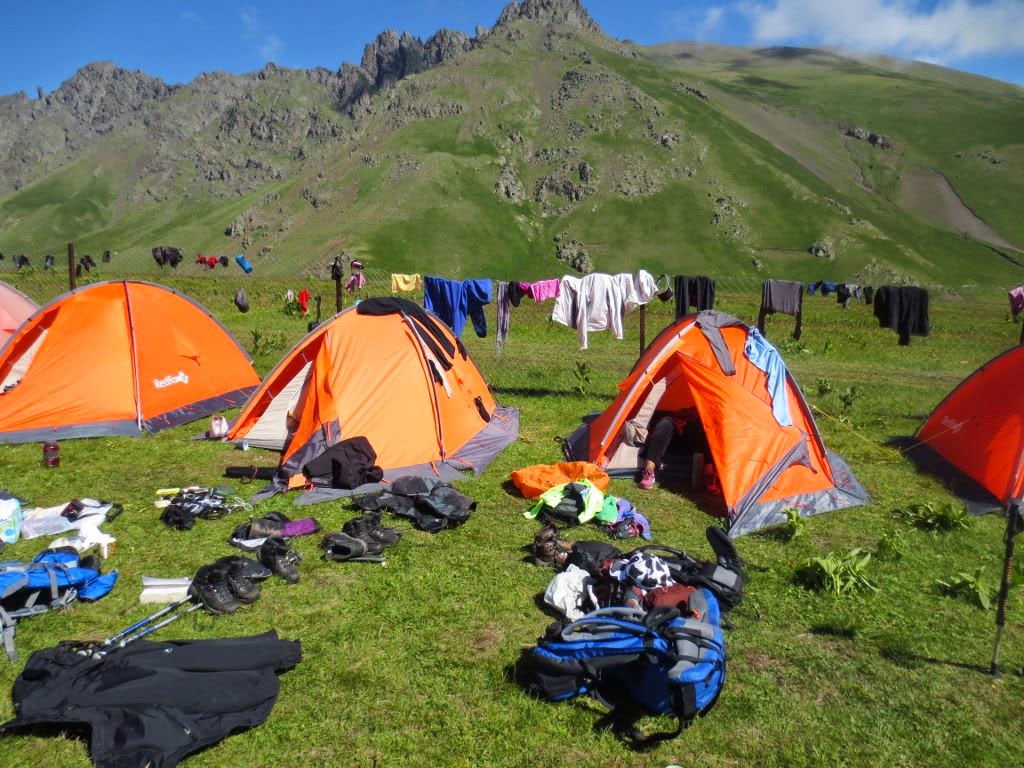