Organising a 42km race for about 45 000 people is a logistical nightmare that I do not wish to manage. I would rather run the race, on a cold winter morning in New York, thank you very much.

For starters, all the 45 000 runners need to be bussed to the start at Staten Island from around 5 to 7 in the morning. They all catch busses at a few designated stations in the city (as indicated on their bibs). They are all divided into waves, colours and corals and they should all get breakfast. They enter the island very early in the morning, layered in t-shirts, coats, vests and gloves that they toss away before the start. Assuming each runner has 3 items of clothing to toss, we talking well over 100 000 pieces. They all go to charity, so that is comforting. The race has three starts (or waves) and therefore three starting ceremonies about half an hour apart. Each wave has three different starting points (green, blue and orange) but the routes merge into one a few kilometers into the race. Then there are distance markers in both kilometers and miles, not forgetting chip readers almost every kilometer or every mile. Then there is bag drop and a bag collection points as well as the finish at Central Park. Supporters are asked to add about 45 minutes to a runners finish time to estimate the time they will exit the park. So picture the many marshals shouting every few metres to “move forward”, “don’t stop”, “keep on moving”, to stop serious pile-ups from forming. And all this is just race day.

I thought the route was fair – it had enough downs and ups – with the hills concentrated more towards the second half of the race. At least that is how it felt but I am afraid my sports watch tells me there was equal distribution of the ascents and the descents, hence the “flat”. The mega support along the way matched the “American super-size everything” that we have come to accept, and so did the “Gatoraaaade?”.

So my beef was really just the cold. Arriving at around six in the morning in the island, surrounded by water if I may add, while waiting to start the race at 10H40 was an experience. I fortunately spotted a generator that was used to power one of the flood lights at the blue camp, so I was kept a little warm until the sun came up. The finish at Central Park is also cold, so runners are provided with foil but I am afraid that hardly helps, especially against the wet t-shirt soaked in sweat.
Overall great experience and like I have said before, in the US, the marathon is big. So prepare to be showered with mega praises before and after the marathon. 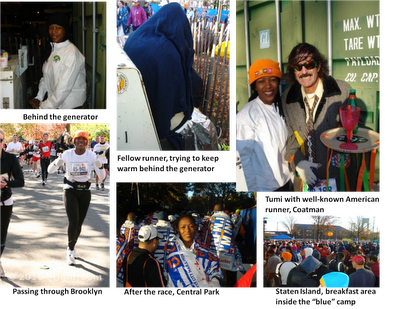